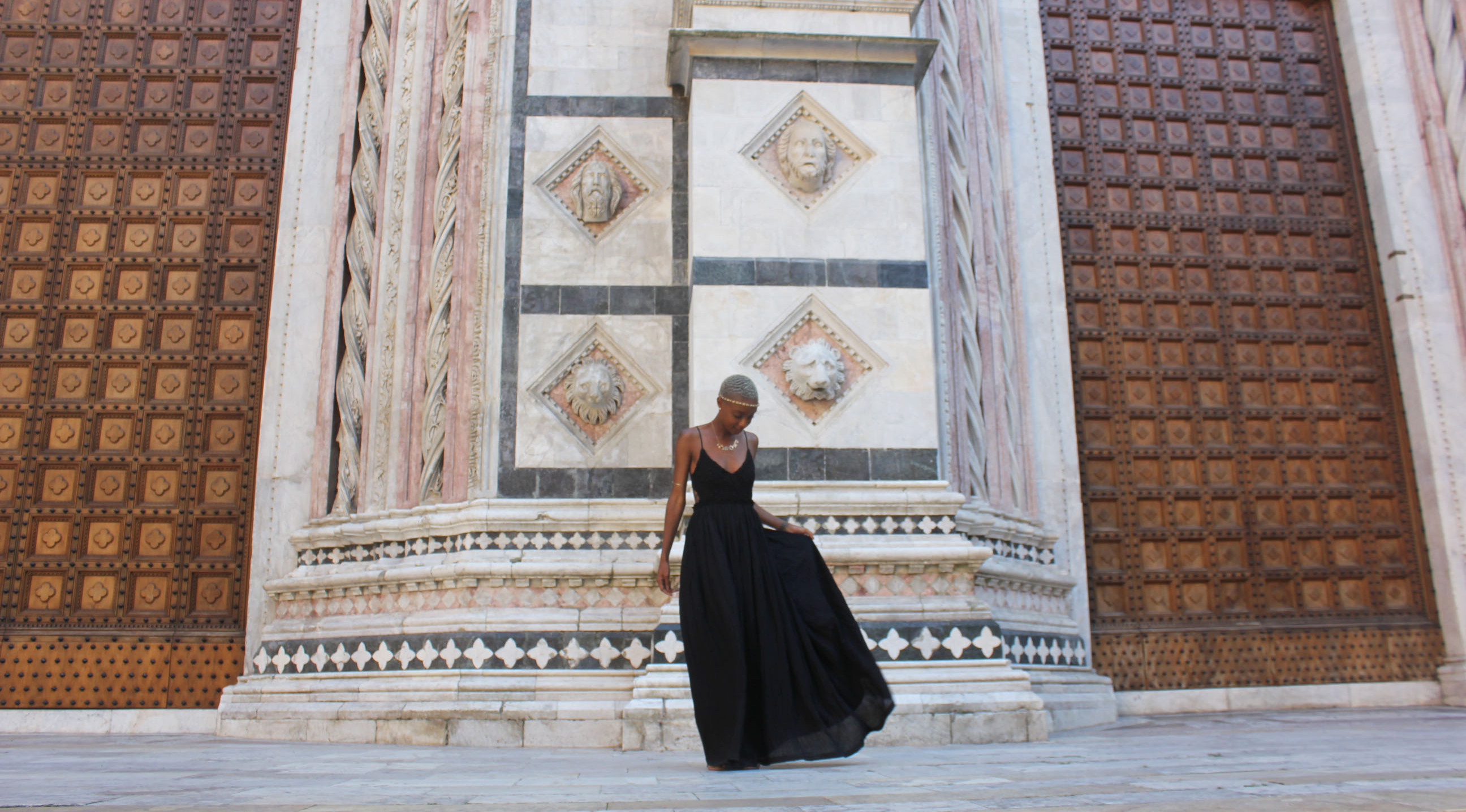 Being in Europe has really shown me how much confidence and feeling comfortable in your surroundings go hand in hand. Since arriving in Siena, I’ve really had to take a step back and reflect on my thought processes and my own internal biases. I felt much more out of my comfort zone than I had expected, particularly as it pertains to race, and I wasn’t sure how to cope with the feeling. So many emotions and assumptions were running through my head on a daily basis that it was hard for me to really appreciate this once in a lifetime experience.

When I’m home in America (never realized how much it really is home until now), I pretty much know what to expect in any given setting. I know what parts of the country, which states, which cities—sometimes even which streets—to be careful on. I know where people who look like me are few in number and where people’s curiosity and/or hostility is likely to be heightened. In Italy, I didn’t have the slightest clue. Don’t get me wrong, I didn’t expect to hop of the plane and find myself in Chocolate City, but I also wasn’t expecting what I ended up getting either.

The moment I stepped off the plane in Bologna, I was greeted by the most intense staring I have ever experienced in my life. Now, I’m no stranger to the “double take.” Let’s face it, a brown skin black girl with short blonde natural hair isn’t exactly American pie. But this was WAY different! I’m sure some of it had to do with the fact that I was completely frazzled after 10 hours of travel—with several more ahead of me—no means of communication (either electronically or verbally) and probably the fact that I was a woman traveling alone when most people were in groups. But I also know for certain that it also had a lot to do with the fact that I was the single speck of blackness in what felt like an overwhelming sea of whiteness. Because I spoke zero Italian (I know about 10 words now), I tried to smile and connect with people on just a basic HUMAN level, but I got nothing in return. Europeans, in general, have much less expressive demeanors than Americans. Think New Yorkers on Xanax. Lol. But at the time I didn’t really know that. All I saw were expressionless faces with eyes that felt like they were burning holes into my flesh. Seriously. One guy even went so far as to, once he passed me and I was no longer facing him, turn around and walk backwards so that he could continue to stare it me. My level of discomfort shot through the roof! In America—besides the fact that staring is considered extremely rude—I almost certainly would have been able to decipher whether his actions were intended to be flattering or hostile. In that situation, I was clueless. He didn’t speak (even if he had, I wouldn’t have understood him). He didn’t smile. Hell, he didn’t even blink! What’s a girl’s supposed to do with that?!

The staring didn’t stop in Bologna. In fact, once I arrived in Siena, it got WORSE—as hard as that was for me to believe. Again, people didn’t speak. They didn’t smile. They just stared. Some even whispered as I walked by. And trust me, even when you don’t speak the same language as someone, you know when they’re talking about you. At one point, it got so bad that when we would go out, my classmates would stand in a circle around me just to shield me from the glaring eyes of the crowd. Some moments I thought I would cry. And I HATED myself for the vulnerability I felt in those moments. Who was this weak, seemingly insecure girl that was inhabiting my body? I didn’t know her and I didn’t want to know her!

For the next couple of days, I put on jeans and a simple t-shirt, very little makeup and did my best to make myself invisible. I just wanted people to stop f*cking looking at me! I’m not some rare zoo animal! I could feel myself growing angry and hostile and I was so disappointed, because this was not how I imagined my summer going AT ALL. After about a week of “hiding,” and realizing that I wasn’t enjoying myself, I decided enough was enough! I was done being a wallflower. I was done being invisible. 1) I paid WAY too much money to be here and not have a good time. 2) I don’t allow my blackness to make me feel small and unwelcomed anywhere else. I’ll be DAMNED if I was going to do it here!

The next morning, I woke up, put on the leggy-ist outfit in my suitcase, a little black lippy, and turned the streets of Siena into my runway. Almost immediately people’s demeanor around me changed. They still stared. But now it was almost as if they felt inconsequential. For the first time, I could read something in their eyes. It was awe. Sometimes, perplexity. But always intrigue. I just smiled and mentally patted myself on the back. “You want a show? Well, here it is baby. Take it all in.”

In the weeks since, I’ve noticed that because I’ve refused to wilt in their presence like I did that first week, it’s not as easy for them to dismiss me. They tell me I’m beautiful (in Italian). They speak to me when I enter the room. Even buy me drinks at the bar. Lol. 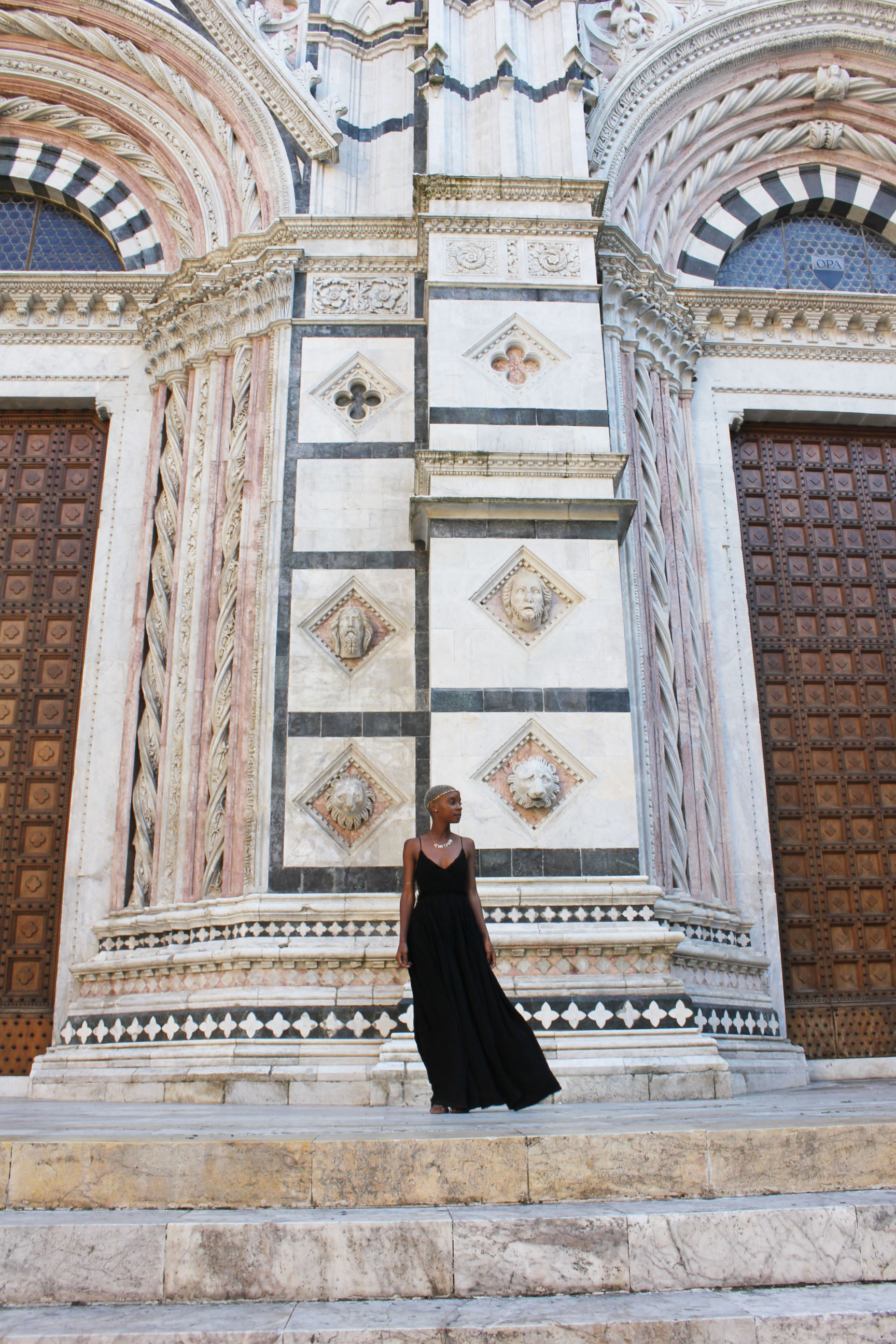 People often ask me, “How is it that you’re so confident?” and I often tell them that when you love yourself, everyone else will follow your lead. For a second here in Italy, I forgot my own words. I let the fact that I was in a new place cloud that lesson. But now that I’ve given myself a much needed kick in the butt, I’m excited to see what else I learn in the time I have left here in Europe.

So my time here in…

I recently took a day…