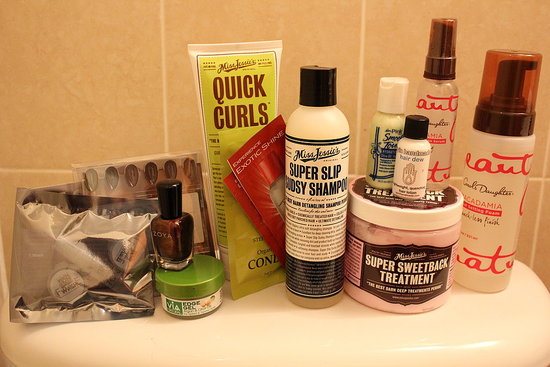 Battle of the Curls: Miss Jessie’s vs. Kinky Curly

I had the pleasure of attending two really cool events recently–the Juicy Magazine Launch Party & Polish Bar Brooklyn’s 5 Year Anniversary Celebration. Both events gave out some neat (and useful) swag in the goodie bags. Because of this, my collection of natural hair products is pretty well stocked. I’ve got Miss Jessie’s, Carol’s Daughter, Kinky Curly…you name it!

Tonight I decided to test out the Miss Jessie’s products. I’m an avid Kinky Curly user, so I wanted to see how the two lines compared.

I started out by using the detangling shampoo. (No complaints there.) And then, followed up with the deep conditioner. THIS STUFF SMELLS SO GOOD!!! It has an awesome bubblegum scent. I had to fight the urge to taste it. Don’t judge me! I was only gonna try a little bit. lol

After letting the conditioner sit for 30 mins–per the instructions–I followed up with the Quick Curl Creme. This one smells great too! Just like a Lemon Head!

You can see my hair was longer and thus thicker when I took the Kinky Curly photos, which makes it a tad curlier as well. But overall, I’d say Miss Jessie’s is pretty decent. Miss Jessie’s gets extra points for those delicious smells. However, at the end of the day, I’d still have to go with Kinky Curly because of the added curl definition.

Guess what?! Yesterday was my…